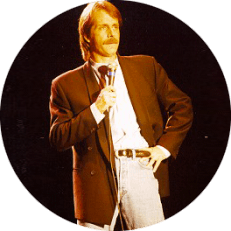 Born in Atlanta, Georgia, the son of an IBM executive and loving mother, who would have thought that Jeffrey Marshall Foxworthy would one day grow up to be the most successful comedians of all time. After graduating from Hapeville High School, Jeff attended Georgia Tech then worked for several years in mainframe computer maintenance at IBM. But soon after, Jeff's life would change drastically.

At the urging of several co-workers, who apparently found Jeff's jokes worthy of the comedic stage, Jeff entered and won the Great Southeastern Laugh-off in 1984 at Atlanta's Punchline Comedy Club.